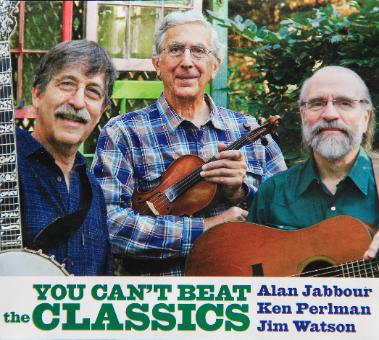 “YOU CAN’T BEAT THE CLASSICS”

You Can’t Beat the Classics is a compact-disc (CD) collection of twenty-two distinctive settings of oldtime music classics and rarities from Appalachia and beyond. It is performed by three artists: Alan Jabbour on fiddle, Ken Perlman on clawhammer banjo, and Jim Watson on guitar and vocals. Classic tunes are inherently worthwhile musically, or they would not have
become classics. Certain tunes also seemed worth revisiting because fresh versions might stir up renewed interest. We hope that the musicality of our settings stirs fresh enthusiasm for these grand old classics. For good measure, we’ve also included a number of wonderful tunes never released before.

Ken Perlman and Alan Jabbour have been playing music together for fifteen years, and ten years ago they released a CD of fiddle-banjo duets, “Southern Summits.”  “You Can’t Beat the Classics” sounds more “band-like” thanks to a third musician, Jim Watson, who joined Alan on the second Hollow Rock String Band LP in the early 1970s.

“You Can’t Beat the Classics” may be purchased from Alan Jabbour for $15 plus $3.50 shipping/handling:

Learn to play like Walt Koken.  Order the book and CD: